MHI bus support gets added to the Linux kernel

Greg Kroah Hartman once said, “Buses are hard and complex. It is hard to write a bus. But it turns out that there are one or two new buses every kernel release”.

Recently, a patch series was posted to LKML for adding MHI (Modem Host Interface) bus support to the Linux kernel. This article will briefly talk about the internals of MHI and its implementation in the Linux kernel.

MHI is a communication protocol used by the host processors to control and communicate with modems over high speed bus interface like PCI-E or shared memory. The MHI protocol has been designed and developed by Qualcomm Innovation Center, Inc., for use in their modems like SDX20/24. The protocol aims to improve the communication between host processors and external modems. Modem chipsets have become quite complex as they perform several functions, such as downloading the firmware from host processor, controlling the wireless transceivers, receiving and processing the commands from host, handling multiple networking protocols, etc… In order to efficiently control and interact with the modem chipsets, MHI provides a comprehensive solution as a whole.

Qualcomm has patented this protocol and deployed it in a wide range of devices running Linux based OS. Even though the MHI protocol is closely tied with PCI-E, it is possible to use other physical interfaces as well.

In 2018, Qualcomm made a first attempt at upstreaming this protocol to the Linux kernel. That effort didn’t go far and it was discontinued after a couple of iterations. This work has now been revived by Linaro, addressing the concerns raised by the upstream maintainers for the initial submission by Qualcomm.

The MHI specification is proprietary and is not made available to the public. But, a reasonable effort has been made to document the protocol in the recently submitted patch series. The below content can be read in conjunction with the kernel documentation for MHI.

The channel configuration is static, which means the purpose of channel is fixed and will not be changed during runtime. The below picture illustrates the exchange of messages over IPCR channel with PCI-E as the physical interface. 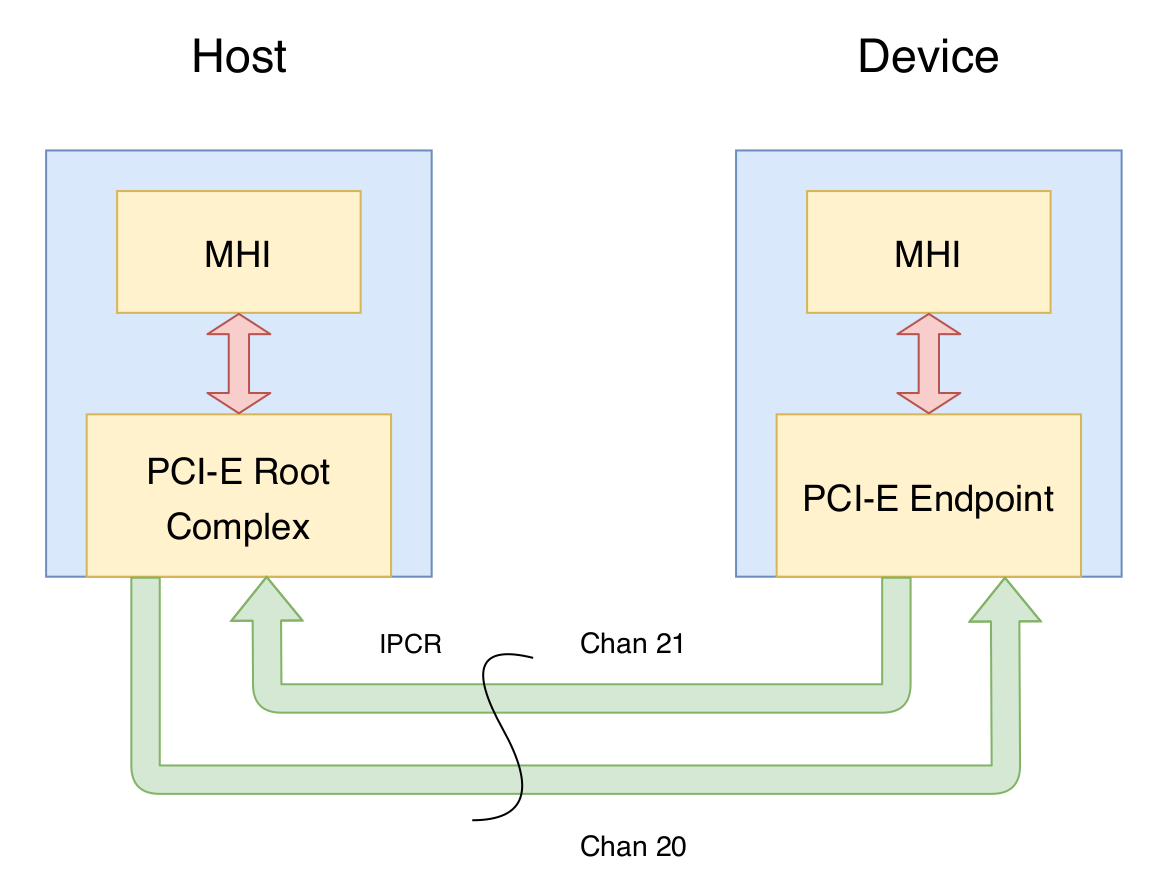 The above structure represents an MHI channel in the kernel. Note the *mhi_dev pointer in the structure. It will point to the MHI device created for this channel when MHI is in AMSS (Advanced Mobile Subscriber Station) or SBL (Secondary Bootloader) states. Most of the fields for this structure will some from struct mhi_channel_config available in the controller driver.

MHI events are the interrupts coming from the client device (e.g. the modem). The client device generates events for MHI state transitions, error conditions, completion messages to the host. The MHI events are generated using the Event Ring (ER), which essentially is a data structure available in the host memory, mapped for the device. The events’ rings are organized as circular queues of Event Descriptors (ED). Each event descriptor defines one event that is communicated from the device to the host through an actual physical interface such as PCI-E. Each event ring has an associated interrupt (MSI in case of PCI-E). The number of interrupts may be limited in the host processor, therefore multiple event rings may share available interrupts to accommodate more events.

The above structure represents an MHI event in the kernel. Note that there is an IRQ field for each event, which can be unique or shared. This IRQ will be used by the modem for sharing events to the host in the form of event rings. When an event gets added to the event ring, the IRQ associated with the event ring will be asserted in the host. Most of the fields for this structure will come from struct mhi_event_config available in the controller driver.

Reset is the default MHI state after power-up. MHI can also enter reset state later on, when either the host or device request reset such as after encountering an error. During this state, the device software will initialize and set relevant MMIO registers internally.

Once the device comes out of reset and is ready, it will set READY field in the MMIO register indicating that it is ready to accept MHI operations. The MHI stack running on the host will detect this change. In response, the host will prepare data structures and initialize the MHI MMIO register space.

MHI is running and operational on both host and the device. Now the host can start channels by issuing channel start command. In this state, the device can switch its EE (Execution Environment) to SBL, AMSS states and start generating events to the host.

MHI operation is suspended by the device. This state is entered when the device detects inactivity at the physical interface for a preset time and also the DEVICE_WAKE signal is deasserted by the host.

MHI is in low power state. MHI operation is suspended and the device may enter lower power mode.

MHI operation is stopped by the host. This state is entered when the host suspends MHI operation.

MHI supports downloading the device firmware over BHI (Boot Host Interface) protocol. The MHI stack assumes that there can only 2 types of firmware downloaded to the device, AMSS, and SBL. The firmware name should be provided by the controller driver as below:

It should be noted that there can only be one firmware supplied at a time. If the device requires both AMSS and SBL images to be downloaded, then both firmware needs to be clubbed into a single firmware file, or another protocol is required to supplement the loading of additional firmware files. For the first case, additional properties shall be provided by the controller driver as below:

This specifies that the MHI stack needs to do full image download with the size of SBL image specified using sbl_size.

MHI bus implementation in the Linux kernel has 3 major components:

The above structure represents an MHI device in the kernel. There is a struct device present for each MHI device and all available devices will be enumerated in sysfs under /sys/bus/mhi/devices/.

The above structure represents an MHI controller in the kernel. Note the cntrl_dev pointer in the structure, which is used to pass the underlying transport’s (e.g. PCI-E) device pointer to the MHI stack. Since the MHI stack itself is not involved in the physical data transmission, it relies on the existing physical interfaces to do DMA mapping, runtime PM handling of the device etc. Also, each controller will have a mhi_dev associated with it, which will be the child device of physical bus device as per the device model.

For instance, below is the channel declaration of the QRTR MHI client driver included in the patch submission:

So the client driver binds to IPCR (IPC Router) channel. Note that, there can either be one MHI device per channel, or one for the MHI channel pair. This entirely depends on the controller driver configuration.

The above structure represents an MHI driver in the kernel. There is a struct device_driver for each MHI driver so that it can bind to the corresponding struct device. Also, there are few callbacks available which are required by the MHI stack. So a client driver should pass relevant functions for these. The purposes of these callbacks are explained below:

The registered client drivers will be available in sysfs under: /sys/bus/mhi/drivers/

I hope that this article provided a good overview of MHI protocol and its implementation in the Linux kernel. Reviews are actively ongoing for this patchset and things are looking good for merging this in one of the upcoming releases.